We at Sword Health are committed, collectively and individually, to freeing the world from pain. But doing so is more than simply making pain disappear. With hundreds of thousands of lives lost, it’s up to us to understand the entire ecosystem of pain and take action.

In the 1990s, the medical community pushed a new way of thinking about healthcare: to consider pain the "fifth vital sign." A movement followed that focused on eliminating pain — fast. As with any "vital sign" (temperature, heart rate, breathing, and blood pressure), physicians often take a two-pronged approach to treatment: medication for short-term intervention, and lifestyle changes for long term health. Today, this approach to healthcare prevails. If your blood pressure is too high, you’ll get a prescription, and a diet and exercise regimen — one to solve the immediate problem, and the other to maintain a better life.

Sadly, treating pain as a vital sign was ineffective. It pushed medications to market, flushing society with highly addictive drugs. Even when prescribed therapeutically, these drugs couldn’t address the lifestyle factors that caused the pain in the first place. Instead, we were left with an epidemic: the opioid crisis.

In 2017, opioid addiction was flagged as a public health emergency. Since then, opioid-related deaths have seen a harrowing uptick, with over 40 US states reporting increases in opioid usage during the pandemic. Between 2019 and 2020, nearly 92,000 lives were lost to opioids in the United States, increasing by 30%. In 2021, the mortality rate climbed again, taking 107,000 lives. Today, you are more likely to die by overdose than in a car accident.

Within the opioid crisis lies another glaring problem. A 2022 report released by the Centers for Disease Control and Prevention illustrates how, in the wake of COVID-19, opioid-related deaths for minority groups have reached staggering heights. Between 2019 and 2020, overdose deaths increased 22% for people who are white, Asian and Pacific Islander, or Hispanic. But deaths hiked by 44% among Black individuals and 39% among American Indian and Alaska Native people.

According to the CDC, young Black people between ages 15 to 24 had the largest spike in death rates from 2019 to 2020, at 86%. For white people of the same age, mortality rates increased 34%. American Indian and Alaska Native women between ages 25 to 44 died from overdoses at twice the rate of white women. Black men aged 65+ died from prescription overdoses at seven times the rate as white men of the same age. Of these deaths, the majority had no history of substance use disorder. According to the report, white people who died had significantly higher rates of treatment than other racial groups. 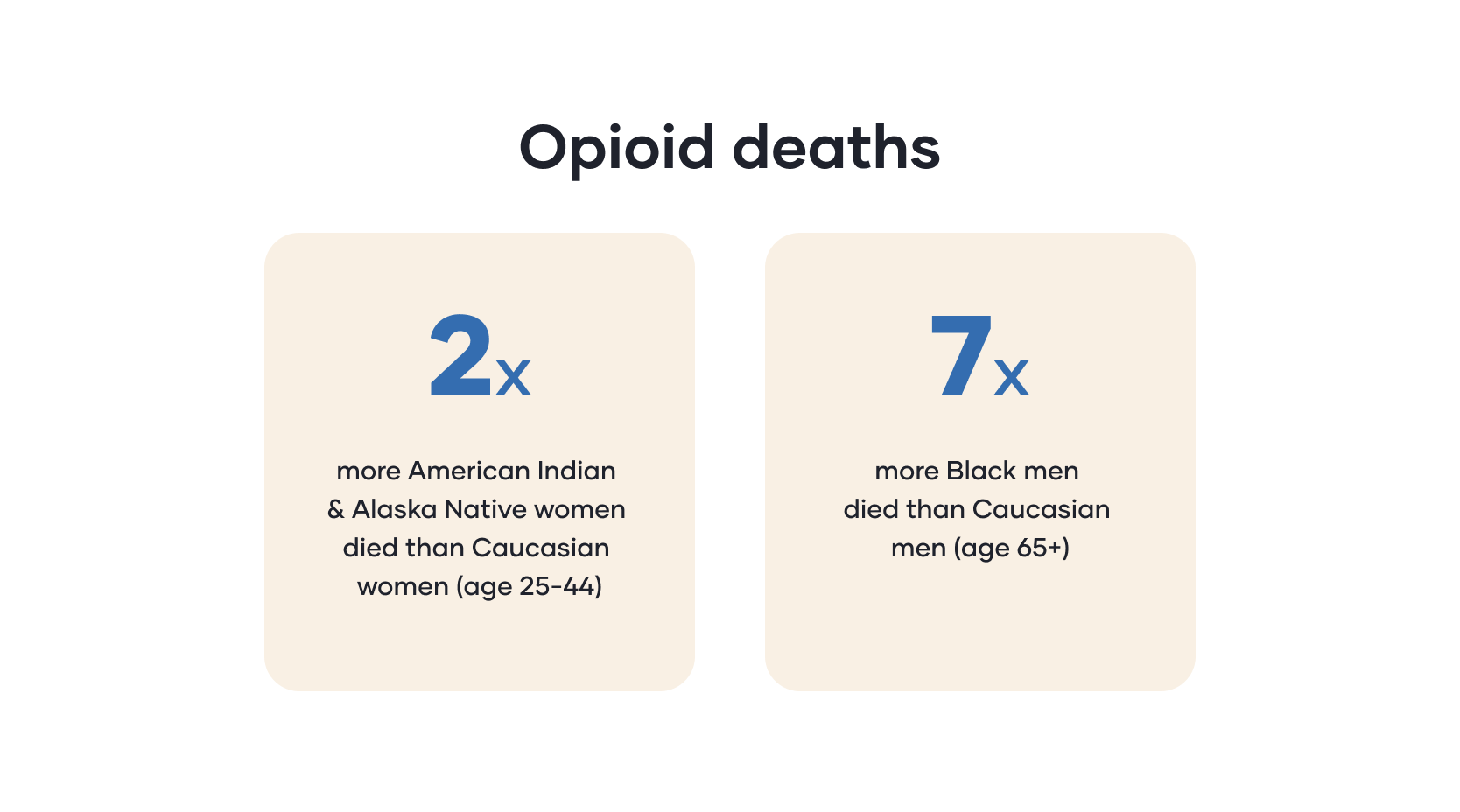 These numbers paint a tragic picture of racism in healthcare. Spurred on by socioeconomic and systemic inequities, Black and American Indian communities endure the brunt of the opioid crisis — and that needs to change. As pioneers in digital healthcare, we at Sword Health are responsible for closing gaps and ending disparities wherever we can, creating an equitable space for treatment.

How do we fix the problem?

We solve the problem that turns people to opioids in the first place — physical pain.

The drug crisis is a pain crisis

A jarring number of prescription opioid users suffer from musculoskeletal (MSK) conditions, with 63% of regular users reporting arthritis and 59% reporting back pain. Up to 29% of patients prescribed opioids for chronic pain misuse them, and up to 10% of them will develop an opioid use disorder. 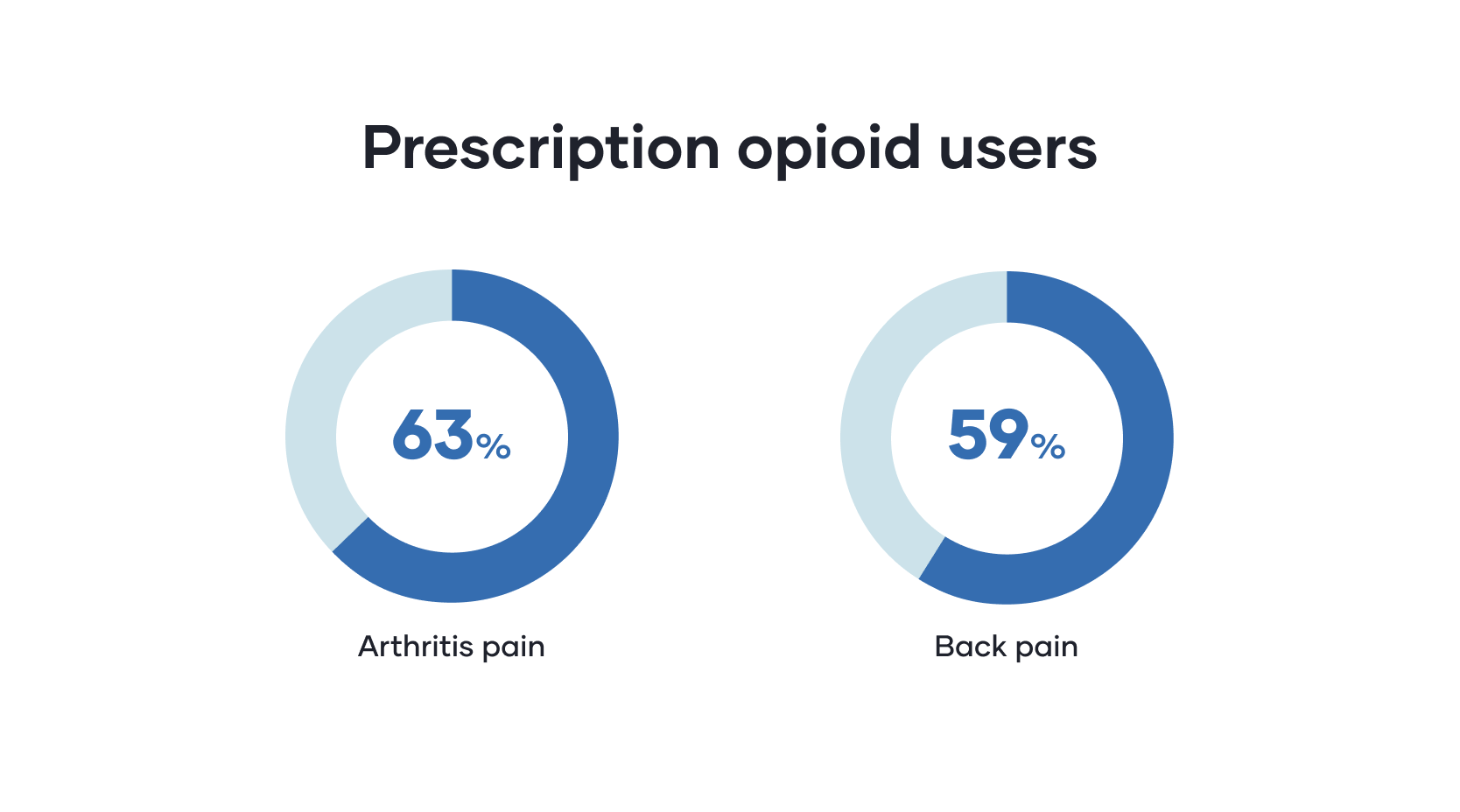 Beyond addiction, opioids don’t resolve pain at its source — they mask symptoms. The function of opioids is to block pain receptors in the brain. Using them long term leads to tolerance, which means you’ll need higher and higher doses to reach the same level of relief. This often has a negative effect on emotional health. In the beginning, opioids produce feelings of wellbeing, but over time and tolerance, feelings of depression and withdrawal take over. And still, physical pain persists.

To end the crisis, non-invasive, non-pharmacological treatments like physical therapy should be the first line of defense for chronic pain. And they need to be equitable, accessible, and cost-effective.

The American College of Physicians and the CDC recommend a combination of therapeutic exercise, education and behavioral interventions to relieve MSK pain without the use of drugs. The challenge has been making these kinds of interventions as readily-available and easy to use as medications — and that’s where Sword comes in.

Black, Hispanic and minority patients do not access telehealth as much as their Caucasian counterparts. They’re more likely to visit the emergency room or make an in-clinic visit instead of using a telehealth service. They also fare worse following rehabilitation than white patients.

Transportation is also a barrier to healthcare access, especially for low-income earners and labor employees. The burden and cost of getting to a healthcare provider or facility leads to missed appointments, delayed care, worsening of chronic conditions, and poorer health outcomes.

Sword’s digital physical therapy solution increases convenience and accessibility with 24/7 access to therapy. With the power of technology, all users receive help for chronic and acute MSK pain, wherever they are. In fact, up to 48% of our member sessions occur outside of working hours, between 6 pm and 8 am, and 22% take place on weekends. By eliminating the need for transportation and other barriers, such as taking time off from work to get treatment, members have access to habit-forming pain relief.

At Sword, we’ve seen how 24/7 pain-relieving movement changes the way people of all races use opioids. Sword programs have proven to reduce pain levels by 62% in just 8 to 12 weeks. Among those who are taking medication, almost a quarter (24%) of them stop completely by 8 weeks, and the others reduce their intake by almost half (48%). All told, digital MSK physical therapy is a powerful tool to help combat the opioid epidemic — and Sword does it best.

To find out how we’re helping thousands of members overcome MSK pain and free themselves from the grip of medications, contact us today.

SHARE THIS ARTICLE
Get the latest news from Sword